Top 5 Places to See a Leopard in Africa

The Leopard is one of the most beautiful animals on the planet. These majestic cousins of the lion, tiger, and jaguar are unique with their varying color that ranges from a light yellow to stunning gold-often times with black spots called rosettes. The large cats live all over the world, including Africa. If you are visiting Africa and are looking to see Leopards be aware they are not the most social animals making them tricky to spot. Luckily, there are safaris and reserves throughout Africa that have large leopard populations. Below are the five top places to see a leopard in Africa.

This park is not only one of the most beautiful places in the world it also gives one of the best shots to see a leopard in its natural habitat. It is the most exciting safari locations in Africa. It is home to lions, leopards, rhinos, elephants, and buffalos. Safari guides recommend looking up when trying to catch sight of a leopard. Leopards love to climb trees and even carry their prey into trees to avoid it getting stolen.

South Luangwa is one of the grandest animal sanctuaries in the world. This is due to the beautiful Luangwa river which attracts animals in hoards. South Luangwa is also known as the Valley of the Leopard. It is estimated that there is one leopard for every 1.5 miles! The leopards can often be seen resting, drinking, or stalking its prey. Leopards are strong swimmers and are very comfortable in the water. They love to eat fish or crabs. 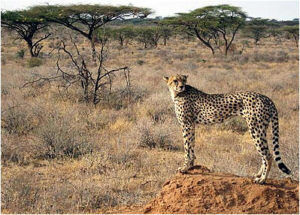 This self-drive safari is a fan favorite. Its arid conditions with breathtaking rivers make it ideal for wildlife. It is recommended to employ an African guide to help spot a leopard. African guides often have what is called African Eye. They are experts at seeing animals visitors normally miss. The bushy landscape and the leopard’s spotted coat make the leopard as elusive as it gets. Make sure to head over to Leopard Gorge and look in the surrounding caves to see leopards resting with their young. Leopard cubs live with their mothers for about 2 years and then they are on their own. They live a very solitary life. 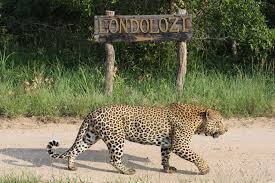 Londolozi has been voted one of the most family friendly safaris in the world. It is also an excellent place to spot leopards. These secretive creatures are studied arduously. Therefore the safari guides are very knowledgeable and helpful in your leopard quest. Here you can learn that these nocturnal beasts enjoy stalking all types of animals including hyenas, antelope, deer, and pigs. Research has also shown that Leopards will attack dogs and even humans when provoked.

Moremi Game Reserve is home to some of the most majestic landscapes in the world. It is home to very dense, wooded areas that the leopard loves to make its home in. The trees in this reserve are not suitable for climbing so most likely the leopards will be on the ground hunting their prey. After spending time in Moremi and the Okavango Delta why don’t you pop into Zimbabwe and stay in one of the amazing Victoria Falls Hotels over looking the majestic Zambezi. The leopard is endangered in many parts of the world including Russia and Korea. In Africa leopards were widely hunted for their coats. But because of booming tourism leopards have been preserved as visitors come to Reserves with the goal to see a leopard.

Leopards are truly unlike any other animal. The leopard’s beautiful coat, elusive lifestyle, and fierce attitude make spotting a leopard truly a magical experience. If seeing a leopard in the wild is your goal Africa gives a great chance of making your dream a reality.